Brizophysics is highly centered on Brizospace and the how the laws of physics are altered there; not enough to signify a new dimension or universe, but just enough to create a kind of twisted reflection of the universe. In Brizospace, matter cannot exist due to a subtle but constant flux in the strong nuclear force, leading to scattered brizoparticles and an abundance of energy. However, energy cannot be channeled out of Brizospace without channeling some in as per the Law of Conservation of Energy, and most forms of energy are too energetic to be directly channeled into Brizospace (with a few exceptions; see BRB Technology). However, matter, being frozen energy in essence, can be transferred in quite easily, whereupon the subtle nuclear force of Brizospace acts on it and forms a nexus where the subtle force gathers in onto the matter and alters the surrounding space as it goes. The force breaks the matter into brizoparticles and energy, which is forced out of Brizospace and into supersymmetric dimensions where it can be retrieved. The brizoparticles, once forced out of Brizospace, soon clump into normal matter which drops out of 8D. However, it is possible to activate a Trevors-Phalen Mass Centrosystemic Field on the point of exit and capture the brizoparticles before they have a chance to change to normal matter.

Brizospace can be defined using the equation:

When x = 2/3 (the amount by which the strong nuclear force is subtly altered) and z = the total number of dimensions in the visible universe. 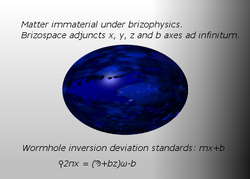 The 2π in the equation accounts for, and denotes the supersymmetrical spheroid shape that universes are, while Ϟ adds exotic matter into the equation, balancing out the irregular expansion in the system caused by anti-mass between cosmic string and exotic matter, and x shifts the laws accordingly. Ϡ+bz is the amount of corresponding contraction in the Brizospace Nexus, added to the pseudofractal times the number of dimensions in the visible universe. This multiplied by the end result, ω, with the pseudofractal subtracted to obtain the Brizospace equation. Or, if one wishes to be picky, then the revised equation is:

Its current importance in the GSOT is #5.

Retrieved from "https://technobabble.fandom.com/wiki/Brizophysics?oldid=4416"
Community content is available under CC-BY-SA unless otherwise noted.